Our volunteer Board of Directors provides oversight and strategic guidance. 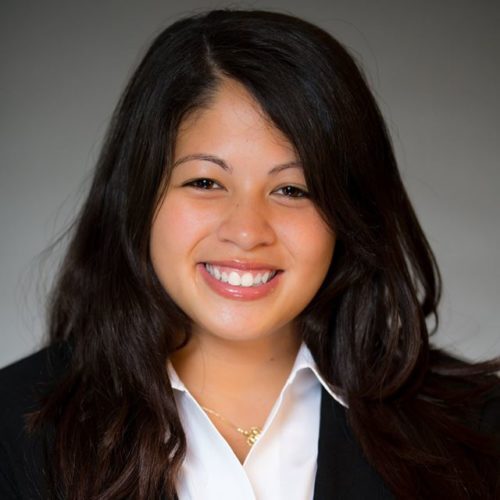 She used the post 9/11 GI Bill to earn a bachelor's degree in journalism at Montclair State University and completed the certificate program at the Connecticut School of Broadcasting in Hasbrouck Heights, NJ. After graduating from college, she was the Digital and Press Assistant for Congresswoman Mikie Sherrill (NJ-11) for one year. She recently made the move to Charlottesville, VA to become a News Producer for CBS 19 News.

During spring break 2018, she traveled to Puerto Rico with student and faculty journalists to document recovery efforts after Hurricane Maria impacted the island. Her mini-documentary "Meals with Love" was featured for the special half-hour edition of "Montclair News Lab: Hurricane Recovery Mission to Puerto Rico." She and her team earned prestigious awards, including a collegiate Emmy from the Television Academy Foundation, Bricker Humanitarian Award, and a student Edward R. Murrow Award for Excellence in Video Reporting from the Radio Television Digital News Association (RTDNA).

Babee served on active-duty in the Marine Corps from 2013- 2016 as an Aviation Supply Specialist in MCAS New River, NC.

Geoffrey Ingersoll is the editor in chief of The Daily Caller.

Geoffrey graduated from Penn State with an English degree in 2004. He then quickly achieved becoming a Teach For America reject, and enlisted in the Marines instead. He served honorably from 2005 to 2009, and ended active service as an Operation Iraqi Freedom veteran. He attended New York University's graduate j-school, studying documentary film and long-form reporting.

Geoffrey has reported from Afghanistan, Iraq, the Korean DMZ, and New Jersey.

Jen brings over 27 years of business experience in three sectors and several industries to JPG.

Jen's portfolio is diverse. She has consulted for numerous not for profits and small businesses over the years. She has found a niche by establishing JPG as a boutique shop that focuses on relationships and common values, missions and purposes. This approach creates a force-multiplication effect. She ensures the organizations she works have a foundation of operation excellence improving quality of life for those they serve.

Jen is known for her philanthropic efforts and for being a bulldog for those she serves. She founded the Steel Mags Sorority in late 2009 and was part of the founding team that established the Green Beret Foundation. She currently serves on the board of Dancing Angels Foundation, Captain Joseph House Foundation and is a founding board member for the proposed charter school, Prelude Preparatory School in San Antonio, TX. She also serves on Your Grateful Nation’s Board of Advisors for the Candidate Screening Committee and is a YGN mentor to transitioning Special Operation Forces service members. She is a member of Business Executives for National Security, Junior League of San Antonio, Greater Houston Women’s Chamber of Commerce, San Antonio Rotary, and the San Antonio Chamber of Commerce.

Jen has been featured in several publications such as Forbes and San Antonio Magazine. Jen has served on numerous boards and continues to do so. She has planned and executed hundreds of events raising millions for charities and has won numerous awards recognizing her patriotism and philanthropic work over the years. Most recently Jen has been nominated for Rice University’s Jones Citizen Award which will be announced mid-May 2019.

Jen graduated from Arizona State University (fork em'!!) with a BS in Business Administration majoring in Supply Chain Management. She received her Master’s in Public Administration with a concentration in not for profits and public policy from St. Mary’s University in San Antonio, Texas and an Executive MBA from Rice University (Hoot! Hoot!) in Houston, Texas.

Mike Gentine counsels manufacturers, retailers, and other commercial clients on legal and regulatory matters particularly in the area of consumer goods and product safety. Drawing from his federal government, private practice, and in-house experience, Mike advises on compliance strategies and government relations, helping clients advance legislative and policy objectives at the state and federal levels. His experience in the product recall space includes having negotiated or collaborated on consumer product and motor vehicle recalls in multiple countries.

Mike held multiple positions at the U.S. Consumer Product Safety Commission (CPSC). He served as senior counsel for the Office of CPSC Commissioner Joseph P. Mohorovic from 2014-2017, where he advised on various policy, enforcement, and ethics issues. He led several efforts to reform rules and regulations, including an initiative to reduce the paperwork burden on CPSC-regulated companies. He also worked at the CPSC as a legal fellow and law clerk in the Office of Commissioner Nancy Nord.

Aided by a prior career in broadcast journalism, Mike is a frequent speaker at industry and other conferences on product safety, regulatory, compliance, and government affairs topics.

My name is Paul Szoldra (pronounced ZOAL-druh). I am a reporter and editor based in southern California, mainly focused on national security issues. My byline can be found at Task & Purpose, Business Insider, and We Are The Mighty.

Me or my work have been featured in The Wall Street Journal, The Washington Post, MSNBC, CBS News, USA Today, ABC News, Huffington Post, and the Columbia Journalism Review. It has also been cited by the Department of Defense, Department of the Army, Army Cyber Institute, House Armed Services Committee, House Judiciary Committee, U.S. Securities and Exchange Commission, and in various books.

Prior to becoming a journalist, I served as a U.S. Marine infantryman for eight years. I deployed to the Asia-Pacific region and Afghanistan and served as a combat instructor at the Corps' School of Infantry.

Priya Sridhar is a reporter for NBC San Diego. She comes to San Diego from San Antonio, Texas where she worked as a general assignment and investigative reporter for KENS5, a CBS affiliate.

After returning to the U.S., Priya worked as a video journalist for the Associated Press based in Chicago. She has also worked as a D.C. correspondent and morning show co-host for an international news channel, Arise, headquartered in Nigeria.

Some of her most memorable stories in her ten year journalism career include covering the Michael Brown shooting in Ferguson, MO for the Associated Press and Nigeria’s historic 2015 presidential elections.

Priya has a master’s degree in broadcast journalism from Northwestern University and a bachelor’s in international relations and history from Bowdoin College. Priya is also an officer in the U.S. Navy Reserve and serves as a Board Member of Military Veterans in Journalism.

Russell Midori has worked in multimedia production for ten years, both as a freelancer and on newsroom staffs. He has held a staff position as a journalist and cinematographer for CBS News network since 2017, traveling overseas and around North America to produce breaking news, character-driven features and the occasional long-form broadcast. He relies on his documentary background to influence storytelling on CBS This Morning, Evening News with Jeff Glor, 48 Hours, and CBS Sunday Morning.

Russell is an Overseas Press Club Foundation board member, a frequent guest lecturer at colleges and universities, and he volunteers as an alumni mentor for students in the Brooklyn College Radio and Television department.

He used the post-9/11 GI Bill to earn a bachelor's degree in broadcast journalism from Brooklyn College and a dual master’s degree in investigative journalism and documentary production from Columbia University. He has done field work in Iraq, Kurdistan, Korea, India, Mexico, Haiti and Standing Rock. He produced several segments for an Emmy-winning broadcast, and received an OPC award and a Mark of Excellence Award from the Society of Professional Journalists.

He served on active-duty in the Marine Corps from 2008 - 2012, and was twice named an honor graduate of courses at the Defense Information School. During his enlistment he held the rank of sergeant and served as the NCOIC of the Parris Island Public Affairs Office. In 2014 he did a six-month tour at Marine Forces Europe and Africa as a reservist, working as the director of photography and editor for Marine Corps video content shot across both continents.

Zack Baddorf is a journalist and filmmaker with more than 15 years of experience producing award-winning stories from more than 30 countries, including Syria, Iraq, Ukraine, Afghanistan, Pakistan, the West Bank, and Kashmir, as well as rebel-held territory in Sri Lanka and Burma.

While based in the Central African Republic, Baddorf broke the news of the American military ending its mission against the Lord’s Resistance Army. His in-depth reporting on the Syrian town of Moadamiyah contributed to humanitarian access being granted to besieged people there. Weeks before Russian troops invaded Crimea, his reporting from the peninsula highlighted its political importance in the conflict.

Baddorf works as director of video for the International Center for the Study of Violent Extremism, crafting anti-ISIS videos. For a year in Afghanistan, he worked on rural, remote bases for the U.S. Special Operations Command as a civilian videographer, alongside Green Berets, Navy SEALs and Afghan security forces.